In a new report by The Wall Street Journal, that Apple is bringing new subscribers on board at a very high rate, in the US though.

The WSJ says that Apple is gaining 5% a month in comparison to Spotify’s 2% in a month. It would be interesting to see how soon does Apple Music takes over the number one spot from Spotify.

I personally love and use Apple Music from the time it was launched, probably a few months later.

Since I live in Kenya, we don’t enjoy a lot of online services that rest of the world enjoys. The biggest culprit of this is Microsoft. Most of their services are US based only, like Cortana, the discontinued Groove Music service or even Microsoft Edge on mobile devices, which very recently went global.

Spotify and Pandora are also another examples, they do not work in Kenya, unless you find other routes to forcefully make them work, which I personally don’t like it.

So in this world where such interesting services work elsewhere and not in Kenya, Apple Music has been available in this region from almost the time it was launched. Which is really a deal for me and I believe for many others.

Since I have switched over to Apple Music, I have been enjoying listening to music, each time there is a new song out from my favorite artist, it almost instantly hits Apple Music ready for you to stream on WiFi or 4G connection or download it to your device. 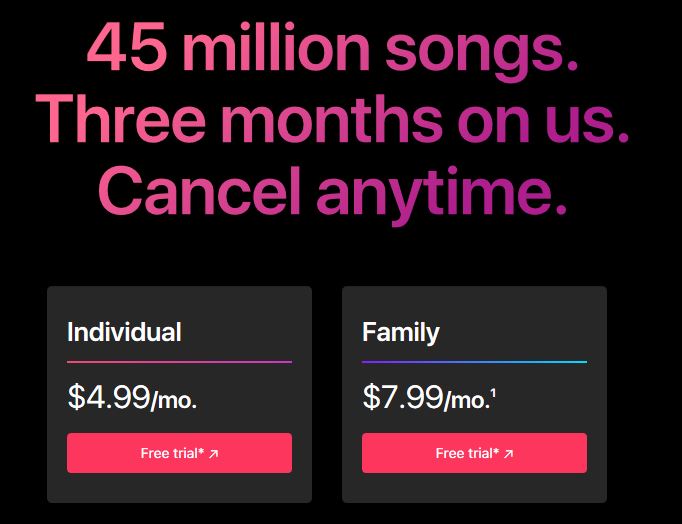 Apple Music is available on, of course Apple devices (iPhone, iPad, Mac) including soon to launch HomePod, it is also on Android devices, Windows via iTunes app.

You can go by two plans (see above image) after exhausting 3 months of free trial, one is:

Any music lover should give a try to Apple Music, 3 months is free so well, there is no loss. If you don’t like it then simply drop and don’t renew it.